IWAKI DIECAST CO., LTD.efficiently operates the multi CAD / CAM environment in the mold designing and manufacturing process, and at the same time facilitates communication between the design / manufacturing department and the manufacturing department We introduced 3DTascalX as "data distribution hub". 3DTascalX has been firmly established throughout the company as one of the driving force for manufacturing molds with higher quality, shorter delivery time and lower cost, by making "all 3D conversion" a big step forward.

Metal casting method "die casting" is a method in which molten aluminum or zinc is poured into a mold. Since high precision castings can be mass-produced in a short time, they are widely used in the manufacture of automobile parts and the like. As a comprehensive manufacturer of this die casting, which has established an in-house integrated production system is the company headquartered in Yamamoto-cho, Watari-gun, Miyagi Prefecture. "Life of Die casting is a metal mold, the manufacturing flow that we have reached with aiming for better die casting production is an integrated production inside the company," it is "mold design and production of multipoint engineering molds", said the section manager of the Innovation Promotion Office Mr.Atsushi Suzuki. In the company, all designers and producers are "multi parallel engineers". The designer visits a meeting with the customer, examines and proposes the most suitable plan, and takes charge of consistent designing of molds and prototypes. In the mold fabrication process, the same producers consistently handle the entire mold making, from NC data creation to machining operations such as cutting, polishing and moulding. "Multi-purpose workers are highly motivated only for their heavy responsibility and high per-capita productivity, especially for molds to make high quality ones in a short time, multitasking die design and production It is suitable, "Mr.Suzuki explains. 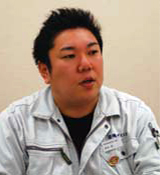 In all manufacturing fields such as the automobile industry, industrial machinery, office equipment, etc., the demand for QCD is getting stricter. "In order to push the manufacturing strengths domestically in front and compete, we must further improve QCD," Mr.Suzuki said. With this feeling, the company-wide project "Rock leather (abbreviation for Gangkak rock machine innovation project)" started in 2007. To achieve QCD improvement, the technical department of mold design and production also set four goals. "Advancement of multifunctional mold design and production", "Realization of multi CAD / CAM environment", "Introduction of viewer to become a data hub", and "Realization of three dimensional deployment to manufacturing department". Because multitasking requires a wide range of business areas by one person, CAD / CAM / CAE tools want to be used in the most efficient one for each job. Therefore, it is important to develop an efficient multi CAD / CAM environment. However, from suppliers, it is offered in various data formats such as IGES, STEP, CATIAV5, ACIS, Parasolid. Convert 3DTascalX with high precision so that it can be used in multi CAD / CAM environment used by designers and creators Yes, it functions as a "hub" of data distribution with business partners. Three-dimensional data use has been established in designing and manufacturing, but we have passed paper drawings to the manufacturing department. In the future, information distribution between design and manufacturing will be three-dimensional, and even in the manufacturing process, we will aim to further improve QCD by consistent use of 3-dimensional data. Also necessary is a three-dimensional viewer that becomes "hub" of data distribution. In order to efficiently operate the multi CAD / CAM environment and also to facilitate mutual communication between design and production and manufacturing department, introduction of 3D viewer was indispensable.

Not only to see CAD data, but also "the ability to draw 3D drawings" is the most appealing

"First we saw 3DTascalX and judged that" this can be used ", we have not examined other products anymore, so that 3DTascalX has fulfilled the requested function firmly," Mr.Suzuki said. The biggest evaluation point is "able to draw 3D drawings". A normal viewer product is just a tool to look at shapes made with CAD and cannot fill tolerances and manufacturing instructions. However, it is very troublesome to input all the information on the three-dimensional CAD in advance. For 3DTascalX, you can fill in dimension notation and notes you have not entered for CAD in 3D model; you can also feed feedback to designer with comments in manufacturing department that saw it. "There was also a disagreement on abolishing paper drawing entirely because there are also disagreements between manufacturing departments, department creating documents, cooperating companies etc. Because we cannot work with" just seeing "3 dimensional shape, but if 3DTascalX, information is neat as I can write and interact in two ways, I was able to eliminate the sense of resistance to the abolition of paper drawings, "Mr.Suzuki says. It was also important to be able to deal with diverse data conversion with almost "no option". Moreover, operation is easy and easy to use. "Because it is a" data distribution hub "used by people in a wide range of departments, I also emphasized that it is well-supported domestic software. When I inform you of the request, you can change / add functions by next version; it will make it easier to use and have longer matches, "Mr.Suzuki added

"Rules for data delivery standardized in 3DX format" has been established, data distribution is smooth

In the IWAKI DIECAST CO., LTD. I started using 3DTascalX from January 2010. First of all, working on making 3DTascalX data was at Ms. Sanae Otomo of the mold design division. In order to facilitate the utilization of three-dimensional data in the manufacturing department, I input the pin chart of the existing type to 3DTascalX and prepared the database. “3DTascalX was easy to understand and did not require operation practice. Its visual display of icons is easy to understand and intuitive operation. The design change mode function etc. where change parts are displayed automatically color- It was very useful for accurately grasping exactly which part is different from a similarly shaped one, "Ms.Otomo said. We completed input of 6,000 existing pin charts of over 600 types of existing models in just 10 months, contributing to the early launch of 3DTascalX use. 3DTascalX currently uses 3 floating licenses as "data distribution hub" by about 10 people. Designers sometimes bring 3DTascalX to meet with customers. In order to make estimates, it is sometimes used for volume measurement and the like. Furthermore, in order to communicate information from mold designers to mold manufacturers, it is becoming more to use "3D drawings" that tolerances and manufacturing instructions are written in 3DTascalX rather than paper drawings. It is the standard rule to pass model data as 3DTascalX format, and the mold producer converts it to the necessary data format and uses it. Previously, I stuck a paper drawing to the machining center; I questioned a number of paper drawings and imagined the details in my head. Currently, you can quickly compare shapes from various angles by looking at 3DTascalX just beside the machine and you can instantly grasp the assembling direction instantaneously. We no longer need to worry, "Mr.Yosuke Onodera of the Mold Production Division says. 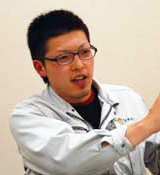 With 3DTascalX, we were able to build a common infrastructure for data distribution, greatly advancing "all 3Dization" of die design and production. The designer does not need to create a paper drawing work and can shorten the lead time by dozens of hours. Moreover, information transmission becomes accurate, and information feedback from the work site to the designer can be done efficiently. In addition, data distribution became smooth by making internal rules that "data transfer is 3DTascalX data format" 3DX is standard "" "As a result of thoroughly enforcing the rule that it is the responsibility of the data sender to create data that will not break when set to 3DX, it has also become established that" data is distributed in the right process and verified with the right process ". Mr. Suzuki pointed out that multi-purpose work has also advanced the goal of "sophistication of multifunctional mold design and production" in the sense that it has made it possible to clearly complete the scope of responsibility for him. In fiscal 2012, we are planning to develop 3DTascalX usage all at once in the entire manufacturing process. "While using the free viewer" 3DXReader ", I also want to do a solid separation of people who make 3-dimensional data, people who use it to convert it, people who see it well. As the number of 3DTascalX users in the future increases, Mr. Suzuki said strongly, "It will be a number reflecting the progress of the project and QCD improvement." 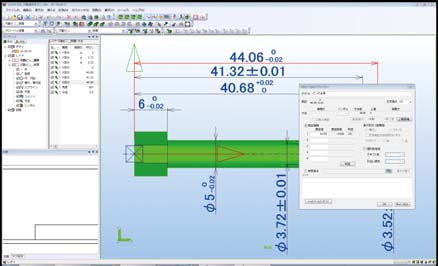 The biggest attraction of 3DTascalX was "able to draw 3D drawings". For the three-dimensional model, we were able to eliminate the sense of resistance inside the company to abolish paper drawing entirely because we can freely fill out dimension indications and tolerances that have not been entered in CAD.