TAIHO SEIKI CO., LTD. (hereinafter referred to as TAIHO SEIKI) has made drawing unnecessary in the prototyping process of automobile parts without drawing, converts the CATIA data provided by the automobile manufacturer, and accurately displays the welding information in 3DTascalX as well. Participating in the big trend of the Toyota group's drawing unnecessary, building a foundation to tackle further transformation, as well as shortening the confirmation time of the welding site at the workers site by 20 to 30% and reducing welding teaching errors.

Newborn TAIHO SEIKI will continue to revolutionize to be a comprehensive general manufacturer of equipment and automobile parts.

Automobile equipment manufacturer headquartered in Toyota-city, Aichi Prefecture · TAIHO SEIKI. Since 2005, the company has been working on innovation towards the dream of "a comprehensive general manufacturer of equipment and automotive parts that can be applied globally."

In addition to equipment / press mold / prototype production, we started production of mass production parts. It is making a leap to a comprehensive manufacturer that can entrust the process of prototype, equipment, mold and parts production. Even in the business division in charge of molds and prototypes, we made a revolutionized change.

In order to incorporate the "welding" process indispensable for production more closely into the overall process, the conventional "prototype / type business headquarters" was reorganized into "prototype, mold and welding business headquarters". By innovating work flow and technology, we strengthened organizational response to customers' needs as well as shorter delivery times. 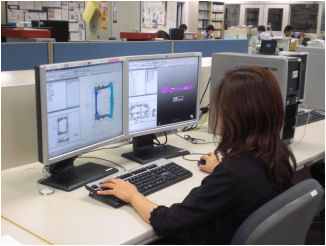 Three-dimensional display is played, an important role in strengthening this welding process. Originally, the prototype welding instructions were made by paper manufacturers' part designers on paper and provided along with CAD data. However, in 2002, TOYOTA announced the transition from its own "integrated CAD" to CATIA on a global scale. Welding information has also been provided as CATIA data.

"Since the paper welding instructions are gone, you must read the attribute data written in the 3-D CAD, but the workers at the welding site have never touched the CAD. It is difficult to operate even if CATIA's environment is improved. CATIA is also expensive. That was the viewer who became essential, "says Mr.Takashi Sakai, the principal representative of prototype, mold and welding business headquarters prototype and type engineering department. 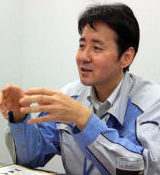 3DTascalX which can convert high precision without dropping attribute data of CATIA.

From the summer of 2005, the prototype / type engineering department compared the viewers' products from each company. The most important requirement is that you can reliably translate attribute information of CATIA data without dropping it, and you can easily perform operations such as measuring, examining, comparing, and extracting only the necessary information. The viewer which meets the requirement was hard to find. After having suffered from various problems, we met 3DTascalX.
"At first, I did not expect so much because C’set was a recent venture company. When translating it, I can read welding symbols and color information neatly and can set secondary coordinate, so" This may be an amazing product” I began considering it with a keen pleasure.

Because the DEMO version is provided and the operation is simple, the company was able to test it with the benchmark that used real data. Also, because there is also a two-dimensional function, it was also an attractive feature that it is possible to output a drawing when paper drawing is absolutely necessary. Moreover, as with many 3DCAD, 3DTascalX uses the Parasolid kernel, so not only the data is lighter, but also the ability as a translator to exchange data in other CAD formats etc. was also one of the valuable evaluations.

The price of the viewer itself is reasonable, but because we did not need to greatly enhance the environment of the PC, it was possible to introduce it at low cost, "Mr. Sakai said. In addition, Ms. Sayuri Niimi of the Technology Division of the business division said, "As a position to use every day, we evaluated places where easy-to-see and beautiful images are displayed. If the viewer has only polygon data, the image is rough and hard to see as it is. 3DTascalX also has a beautiful and simple color display of command icons and makes sense, "he adds.

Still, there were many requests. "When I consulted with C’set's system support, what I was able to deal with quickly corresponded, for example, it corrected the contents of the 3DTascalX engine to increase the conversion rate of CATIA data. However, I was surprised that this was completed in one or two weeks, and I will do frequent version upgrades - it's a venture company, "Mr. Sakai said.

For demands that cannot be addressed immediately, we decided to combine the existing functions. For example, since CATIA's wire and point elements are not grouped, we could not capture bead welding information so we have improved it by having the attribute information be grouped and displayed in the layer section of 3DTascalX, it becomes very easy to confirm the welding part for each part. 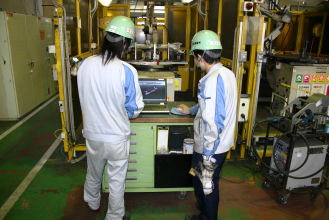 Create a viewpoint to show the order of welding work easily

TAIHO SEIKI introduced 3DTascalX in June 2006 and currently uses 7 licenses. Welding instructions can be created simply by converting CATIA data at prototype / type engineering department, organizing attribute information and displaying it at the 3DTascalX layer. In addition, by using the viewpoint function of 3DTascalX, workers are in charge and tasks are created for each process, thereby giving work instructions like presentation.

"Unlike paper drawings, it is a good point of view function that you can precisely point overlapping parts, it is a strategy as a 3-dimensional drawing of TAIHO SEIKI flow, if you speak in a word of mouth," says Ms. Niimi. Just by explaining the operation for 2 to 3 hours, welding workers have been easily able to do measurement and so on more and more… Teaching to the welding robot is done smoothly while watching the viewpoint information of the work process. It was a “pleasant” miscalculation that only one complaint that "I do not know the operation" came because I was rather worried at first.

There are two effects of introducing 3DTascalX in welding instructions.

One is that the TOYOTA Group's major reform flow, drawing free, was incorporated into the prototype welding process. Moreover, it was possible to promote the measures of welding instructions by drawing-less without introducing CATIA over several million yen.

Secondly, the confirmation work of the welding site became faster by utilizing the three-dimensional data of on-site workers. Time to read and understand two - dimensional drawing difficult to see can be omitted, and information is transmitted accurately.

Workers waited for engineering staffs or customers for unknown points, and work "waiting for work" of not being able to work until a reply came up also ceased to occur.

The welding site confirmation time was shortened by about 20 to 30%. At the same time, welding teaching errors could be reduced. 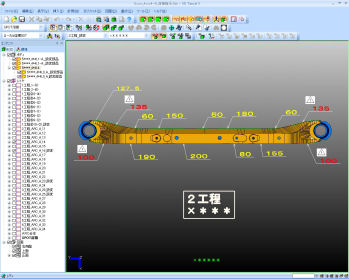 It is also used as data translator for Micro Caelum 3D mold design.

Another design department of press dies also uses 3DTascalX as a data translator. "Although we are using CADCEUS and Micro Caelum 3D for the design of press dies, the best conversion rate from CADCEUS data (CFIO) to Micro Caelum 3D (Parasolid) was also 3DTascalX, thanks to that We could take measures to compensate for disadvantages in both CADs and as a result we were able to increase the efficiency of 3D solid design of molds, "says Mr. Sakai.

As we continue to strengthen our role as a comprehensive manufacturer that TAIHO SEIKI will consistently conduct trial production, equipment, mold and parts production processes, 3DTascalX's turnover will further increase. 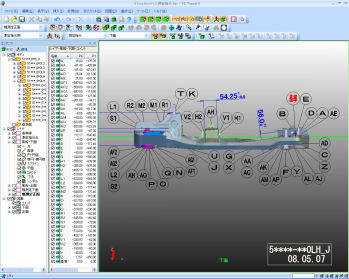 It was a product of a venture company, so I did not expect much at first. However, the conversion rate from CATIA, CFIO to Parasolid is better than any translator. In addition, it corrected this request point in 1 to 2 weeks. It is truly a venture company.