The precision processing technology center and mold group are designing and manufacturing molds for mass production of electronic parts in Omron Corporation (hereinafter referred to as Omron), a major control machine manufacturer. The group introduced 3D CAD and 3D Tascal X in 2006. By consistently using 3D design data in all subsequent processes, we succeeded in dramatically shortening the design production lead time, which took about 20 weeks to "one-tenth".

A revolutionized change to "Lead time one tenth" started

OMRON's precision processing technology center and mold group located in Kusatsu City, Shiga Prefecture is designing and manufacturing molds for electronic parts such as relays, switches, connectors, and sensors. The molds manufactured by the group are delivered to all OMRON Group companies and used when making control equipment. The group is making a total quenching die for mass production, making it complicatedly combining grinding, manual polishing, electric discharge machining etc...

"In the past, molds of relays and switches were the focus, but from around 2004, the work of more precise narrow-pitch FPC connectors has increased, so that precision of 5 to 10 times is required as compared with the past The lead time also increased, the lead time of the relay mold was 8 to 10 weeks, but the narrow pitch FPC connector took 16 to 25 weeks, "Mr.Okamoto, center director of the Precision Machining Technology Center explains.

Lead time enlargement is also a big problem for precision machining center when OMRON Group using that mold. Therefore, in 2005, a project was established to greatly shorten lead time of the mold. To change anyway, let's achieve the industry's most advanced technology to achieve “two weeks ", the goal of the project was to shorten the lead time of 20 weeks to one tenth, Mr.Okamoto said. 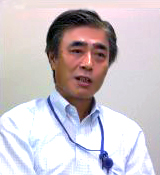 Drawing-less is indispensable to achieve 'Design in 3 days' 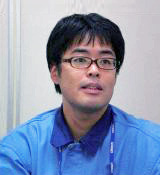 Process dimension measurement with 0.1 micron precision can only be done with 3DTascalX

For the selection of the viewer, workers on site also joined and went carefully. As a result, 3DTascalX was selected. The evaluation 3 points are as follows.
First, it was only 3DTascalX that handled the narrow pitch FPC connector, which requires precision in the order of 0.1 microns, as a complete three-dimensional model and can measure with high accuracy.
Secondly, it is easy to understand and easy to operate, so that field workers can use it without stress. "3DTascalX allows the viewer to make a new secondary coordinate and measure the distance between the point and the point with a simple operation. In the catalog there were viewers covering the same function but it is easy to understand with the shortest operation, 3DTascalX was the fact that people in the field could measure the dimensions needed for processing, "says Mr. Yamaguchi. Thirdly, the function is substantial, and it is reasonable price. It had excellent cost performance that you can distribute to necessary places at once, such as onsite and cooperating companies. 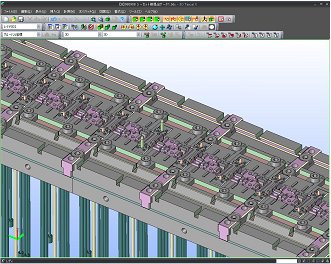 In 2006, the mold group decided to introduce 3DTascalX. Today, 16 licenses are used with network license, and all 3DTascalX data is managed centrally on the server.
Three-dimensional CADs used for die design are SOLIDWORKS and Neosolid.Mold. As a rough procedure, convert this design data in bulk with 3DTascalX, perform in-house design review, and comment on notes on processing etc. Design review participants are all involved in the project, including design, purchasing, processing, assembly, quality control. The processor displays the 3DTascalX data on the display at hand, enlarges the necessary area, changes the angle, measures the dimensions, and proceeds with processing. In addition, information generated at the processing stage is additionally written so that workers in the next process, such as assembling, can efficiently proceed while checking this.

OMRON's 3DTascalX usage has various features. One of them is utilization of layer functions.
3DTascalX allows you to view attribute information and annotations entered in CAD separately for each work step such as "drilling" or "finishing". Therefore, if you are a welder, you can display information only about the welds and work without mistakes while watching a simple screen display. Moreover, in order to transmit tolerance without using paper drawing, we devised how to use color display. We redesigned the design rules, rules and standardized the tolerances, so that designers can accurately convey the tolerance to the processor by merely painting the parts for each part.
It is also important to take a drawing-less system at a stroke to a cooperating company. Currently, six partner companies use 3DTascalX in total of 7 licenses.
We also made organizational reforms. For one project, we appointed project managers who consistently observe all processes from design, processing, assembly, finishing, and have the authority to manage beyond the boundaries of the organization. 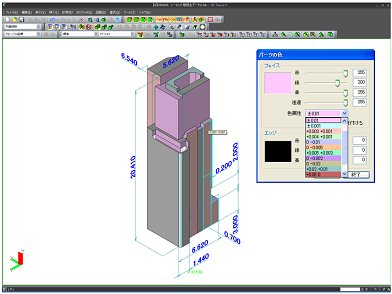 One tenth of the lead time is achieved; the next is one-twentieth

After 1 year and a half by having 3 dimensional CAD and 3 dimensional viewing in 2006; the mold team achieved "one-tenth of lead time". The number of designers' efforts has been greatly reduced. Due to synergistic effect such as design standardization, no drawing, and product development department are using the same 3 dimensional CAD, it is now possible to design die using finished part design data, and 7 to 8 days I was able to significantly shorten the required design to "3 days".
"Even at the processing site, because the point of work can be accurately grasped at a glance, the work speeds up and there is no mistake. With the generation of NC data from 3 dimensional CAD, the productivity is also increasing in machining "Said Mr.Koji Hirasozu, chief inspector of Precision Machining Technology Center. 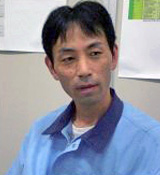 The biggest reason for the success of major change was that the motivation for change was very high. "Because there is only drawing available to do the design in 3 days, we are convinced that everything including the cooperating company is convinced that we have only three-dimensional applications to survive, so the whole organization is gathering all power towards one goal.
Until now It is not only individually optimal, everything has to be integrated into design, fabrication, assembly, cooperating companies, "Let 's do it! "The feeling of excitement came up," Mr.Okamoto said.
Since the mold team of the Precision Machining Technology Center has made great results, drawing-less efforts using 3D design and 3D viewing 3DTascalX are also spreading to other mold manufacturing teams of the Omron Group. 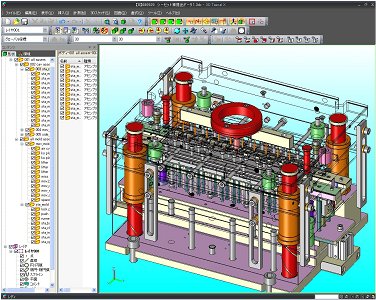 To make the lead time one tenth, drawing less is the only way. The whole organization was able to gather power towards transformation only because all members including cooperating companies were convinced that we had only three dimensions to survive.